Does Green Tea Have Caffeine?

Some people are forced for one reason or another to completely eliminate caffeine from their diet and if this is the case, then green tea is off the list.  This is because the answer to does green tea have caffeine in it is yes, it does.  However if you are looking to reduce your caffeine intake, then green tea can be a great option.

What is green tea? 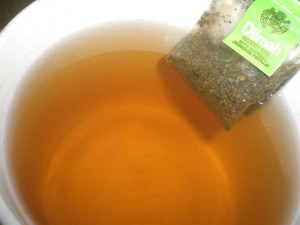 Green tea are the leaves from the Camellia siensis plant that have undergone minimal oxidation during processing.  The drink originated in China but has spread across the world in recent times, where traditionally black tea was drank.  As well as being a drink, it is also an ingredient used in other drinks, health foods and dietary supplements as well as in cosmetics.

When purchasing green tea to receive the maximum benefits, watch for products that do not contain any additives.  Drinks that are prepared in cans or bottles can often contain sweeteners such as high fructose corn syrup.  Additionally, some manufacturers treat the leaves with fluoride.

When making a pot of green tea, it is best to use hot water but not boiling water.  This is because boiling water destroys the flavonoids in the tea that give the best health benefits.

Green tea has a whole list of helpful and healthy ingredients.  As well as the benefits of some of the caffeine-like substances discussed below, it also has been shown to increase the drinker’s metabolic rate.  In one study on healthy men, a 4% increase in energy expenditure was shown while in another, there was a 17% increase in fat oxidation.  All of these may hint at an increased metabolism that allows fats to be burned off quicker.

Another potential benefit of green tea is its antioxidant properties.  Oxidants have been shown to have a large part in the development of cancerous cells so anything containing antioxidants can help reduce this risk.

There are also bioactive compounds in green tea, which have been shown to help brain function.  Over a long term, this can be helpful to try to protect the brain in old age and avoid illnesses such as Alzheimer and Parkinson’s.  While green tea is no cure, anything that can help reduce the chance is never a bad thing.

Finally, green tea has a substance called catechins in it that is great for killing bacteria.  It has properties that can help kill influenza virus and also stop the growth of streptococcus mutans, a harmful bacteria that that grows in the mouth.

If you drink the same number of cups of green tea as you did coffee, you will have reduced your caffeine intake by around 70% in one motion.  One cup of coffee has around 100-150mg of caffeine in it while the same amount of green tea only contains around 25mg.  This can vary between different brands however and the longer you brew the tea, the more caffeine it contains.

In addition to having less caffeine, green tea has two other stimulants in it that aren’t in coffee.  These are called theobromine and theophylline and can affect the heart rate and central nervous system in a way a lot like caffeine.  They are also found in chocolate.

Green tea also contains a substance called L-Theanine, which is an amino acid.  This works to combat the caffeine and other substances to calm the nervous system and is also great for enhancing concentration abilities.

You can buy a decaffeinated green tea that has been treated with a chemical called ethyl acetate.  However, for a healthier option, choose a tea that has had the caffeine removed through a process called effervescence, which uses carbon dioxide and water to remove the caffeine.