If you grew up in the 1980s, ’90s or later, then the automatic drip coffeemaker has always been a household norm. If you’re old enough to remember the 1970s or ’60s, then you can remember what a dramatic difference the coffeemaker made.

Price Disclaimer
Prior to 1972, nearly every household had a percolator coffee pot. For youngsters who have no idea what a percolator is, let us explain. This is a tall coffee pot with a long spout and it contained a tall stem through which the water traveled up as it boiled—the water was first poured directly into the pot. When the water bubbled out of the top of the stem, it fell into a metal filter holding the coffee grounds. Then it dripped back down into the pot. The process repeated itself until you decided the coffee was strong enough to your liking.

In 1972, Vincent Marotta Sr. and Samuel Glazer introduced Mr. Coffee, the first automatic drip coffeemaker designed specifically for the home. Before then, the drip system was only employed by restaurant-sized machines.

While recovering from brain surgery to remove a benign tumor, Marotta came up with the ingenious idea to basically miniaturize the restaurant system. He and Glazer hired engineers to bring the idea to fruition. The new kitchen appliance called for water to be added to a reservoir, not the pot, and it would be heated before passing through the grounds in a paper filter just one time. The coffee then dripped into a separate carafe. Sounds pretty standard today, but 40+ years ago it was revolutionary.

Thanks to an advertising campaign that had Mr. Baseball himself, Joe DiMaggio, pitching Mr. Coffee, the public clamored for the product. Within two years of its debut, 1 million units had been sold, and it was labeled “one of the first convenience appliances that revolutionized food preparation.” By the end of the decade, Mr. Coffee dominated, commanding more than 50 percent of all drip coffeemaker sales.

Still in the Game 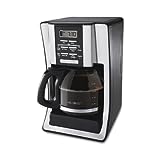 Price Disclaimer
Over the past four decades, designers and manufacturers have added a lot of features, such as automatic start and end times, brew strength selections, steam wands to heat and froth milk for lattes and other elaborate drinks and even different carafe temperature settings. However, they all pretty much still use the same technology as the original drip design back in 1972. And throughout all the growing pains, Mr. Coffee remains a prominent player.

For three years in a row, this model was named best coffeemaker by a leading publication. It was created with user ease in mind. For example, the fact that the filter basket is easy to lift out may not seem like a big deal, but it makes adding grounds virtually spill-free. Nor do you have to worry about spending a lot of time cleaning the machine. A cleaning cycle takes care of the work for you.

If you’re not a regular coffee drinker but you still want an easy-to-use maker for when the mood hits you, then consider this straightforward model. A window in the water reservoir lets you brew only as much as you want. If you’re in a hurry, the brewing pause ’n serve feature allows you to pour a cup before the drip cycle is completed. The machine has an option to add a water filter that removes more than 95 percent of the chlorine from the water for an even better tasting cup. And finally, it’s BPA free.