How to Make Vietnamese Coffee

Vietnamese coffee is called Ca phe da (iced coffee) and is a traditional Vietnamese recipe for making coffee.  If it is made with milk, it is known as ca phe sua da.

The drink was introduced to the country by the French in the 19th century and is traditionally made using dark roast coffee beans grown in the country and brewed with a small metal French drip filter called a ca phe phin.  Because the country had a shortage of fresh milk at the time, it was tradition to use sweetened condensed milk in the drink.

The height of coffee bean growing in Vietnam was in the early 20th century when the small scale productions were replaced by plantations.  The first instant coffee plant, Coronel Coffee Plant, was established in the Dong Nai Province in 1969 and produced 80 tons of coffee a year.

Production declined during the Vietnam War due to the loss of people to work the plantations as well as the limiting of private enterprises.  In 1986, this measure was reversed and the industry saw a growth surge.  Two of the major brands were established in the 1990s, Trung Nguyen in 1996 and Highlands Coffee in 1998, both of whom continue to be major distributors.

By the late 1990s, Vietnam was second to Brazil in terms of the world’s coffee production but it was largely focused on the poor quality, Robusta beans.  In recent times, the government has moved to improve the quality of the beans grown and started producing specialist coffees.

There are now clear regional differences in the types of beans grown across the country and the corresponding flavour of coffee they produce.  Most of the growing is done in the Buon Ma Thuot region and include Arabic, Robusta, Chari (Excelsa) and Catimor varieties as well as some special regional types. 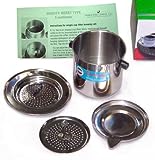 To make a traditional Vietnamese coffee, you will need a Vietnamese coffee filter such as the one shown above.  To start making the drink, use a coarse grinder to prepare the beans, a French grind is another name for this.

The next step is to pour around one to three tablespoons of condensed milk into a small glass, depending on your preference.  If you are wanting to make an iced variation of the coffee, allow the milk to chill.

Next, load the coffee filter with two to two and a half tablespoons of coffee, spreading it evenly.  Replace the top of the filter and begin to screw until the grounds are well packed so no water can get through.  Place the filter on the cup and pour a cup of water that is just about to boil into the filter.  It may take about 5-10 minutes to work if you have packed the grounds properly.  You can then add the coffee to the milk and stir.

If you would like to try Vietnamese coffee in a new way, try Vietnamese egg coffee (Ca Phe Trung).  This is an idea similar to drinks made in Scandinavia using eggs in the coffee and creates a drink that is pleasant and has a mild taste with the natural bitterness of coffee only barely noticeable.

To make this coffee, brew a small cup of Vietnamese coffee, crack an egg and discard the white.  Add the yolk and the sweetened condensed milk into a small bowl then whisk until frothy.  Add a tablespoon of brewed coffee and whisk again.  Pour more of the coffee into a cup then add the egg mixture on the top.