The French Press is one of the preferred ways of crafting coffee by coffee connoisseurs all over the globe.  First invented by Attilio Calimani in France, the French press has gone through many iterations in its history.  The press has gone through a bit of a revival in recent history with the classic Chambord line being bought by Bodum in the 1980’s.  Today it can be found everywhere from homes, coffee shops, and even camping stores!  Instead of the common drip method of making coffee, the French press lets the coffee brew by soaking in the grounds directly.  This results in a much richer brew, and arguably a better cup of coffee.  If you want to get into brewing your coffee via a coffee press instead of a drip maker, there are a few things you need to know for your initial foray. 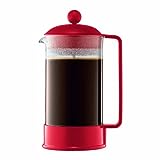 Price Disclaimer
So just how do you make that perfect cup of pressed coffee?  Unlike the clumsy attempts at making coffee via drip machine you most often see, the press requires a slight bit of finesse to get a good cup of coffee.  It can be a little touchier on things like the ratio of beans to water, or the coarseness of the grind.  Make sure you know what you’re doing or else you many get a bad impression of the merits of the French press.  The benefits you’ll find with the French press is the simplicity of making a cup of coffee.  Part of the addicting nature of it is how much more fun it is to craft than using a drip maker.

The first step in making a French press is grinding the beans.  This is arguably one of the most important steps, and is crucial in deciding how your coffee turns out.  For a truly excellent cup of coffee, you want to grind your beans with a burr grinder over a blade grinder.  Just what is the difference between the two?  Blade grinders are the most common you see on the market.  They’re cheaper and usually come in smaller sizes.  They work by chopping the beans into small pieces through a spinning turbine motion.  Unfortunately, this results in uneven bean particles.  While this is not as much of an issue for a filtered-drip coffee maker, this can be problematic for a French press.  The uneven particles create a sort of sludge that is spread throughout the coffee.  While a bit of sludge is to be expected in pressed coffee, a blade grinder will produce an unacceptable amount.

On the flip side, burr grinders grind the coffee by crushing it with a grinding wheel.  Burr grinders produce a much more consistent grind size, which is key for what you will use in a French press.  On top of that, you can adjust the size of the grounds you want.  For a press, you want the grounds to be coarser than you typically would for drip coffee.  How coarse will depend on the filter your press has.  For a metal filer, you can get away with the grind being very coarse.  For a nylon filter you’ll need to ensure that your coffee is a little finer than you’d typically grind it. 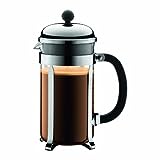 Once you have your coffee ground, you’ll need to divide it up and figure out your proportions.  Generally you want it to be about two tablespoons of coffee to every six ounces of water.  Of course, you can play with this and see what you prefer.  Put the grounds in the press pot and add water.  You want your water hot, but not exactly boiling.  Adding boiling water to the grounds will burn them and mess up the flavor.  For the best results bring your water to a boil and then let it cool off for a couple minutes.

After that, add your water to the press and let it brew!  Once you add your water you want to mix it around so that the grounds are evenly distributed.  Use a wooden or plastic spoon however.  A metal spoon can easily shatter the hot glass or the press.  Let your coffee percolate for about three minutes, and then you’re good to go!  Press down on the plunger and filter out the grounds.  You’ve just made a top notch cup of coffee!