Chock It Up to Chicory

New Orleans is known for a lot of things—Mardi Gras, jazz, bourbon, and of course, Cajun and Creole food. It’s also known for a deep, rich coffee that has a certain flavor to it you normally don’t find in most other places. That difference typically comes from chicory.

If you’ve ever eaten Belgian or French endive, then you’ve had chicory. If you’ve ever had an escarole salad, then you’ve eaten chicory. These plants are from the chicory family and are cultivatedk for their leafy portions. The chicory used for coffee is the root of the Chicorium Intybus species, which has a long history. 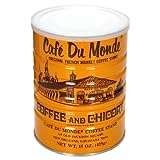 Price Disclaimer
Scientists have discovered evidence that Egyptians farmed chicory as far back as 5,000 years ago, primarily for medicinal purposes. There’s also proof that ancient Romans and Greeks dined on it. Eventually, chicory made its way to Europe, and when the colonists in the New World discovered it growing wildly, they incorporated it into their diets and beverages.

An interesting development occurred in the early 1800s. In his quest to defeat the British Empire, Napoleon Bonaparte enacted the Continental System, which basically prohibited any imports from England. The reason this is a pivotal event in the history of chicory is that the boycott included coffee. When the French people looked for a substitute, they reached for chicory. In fact, they grew to like the taste and believed the root offered health benefits over traditional coffee, so when the boycott lifted, the French people continued drinking chicory.

This preference carried over to the Louisiana territory in North America, an area heavily influenced by the French. So that’s why New Orleans, to this day, is known for serving up chicory coffee.

Although the plant is easily grown all over the world, most of the root products come from either France or South Africa. In many ways, it’s cultivated like sugar beets, but once harvested, chicory is cut into small pieces, dried, roasted, and then ground, at which point, it can be added to coffee grounds.

Of course, you can add chicory to coffee just to give the beverage some extra oomph, but in the Big Easy, the most common preparation is as the café au lait.

If you want to get your au lait fix the easy way, head over to your nearest coffeehouse and place your order. However, it’s not difficult to make at home. Here are the basic steps:

Brew strong chicory coffee. Generally speaking, you will use equal parts of coffee and milk. So however much coffee you fix, you’ll need the same amount of milk.

In a saucepan over medium heat, warm the milk just until bubbles start forming along the edges. At that point, start whisking the milk into a froth.

Next, combine milk and coffee in either a serving mug or a carafe.

For added flavor, top off the hot beverage with:

• strips of orange or lemon peel

If you’re not used to adding chicory to your coffee, but want to taste the difference, then start with a classic brand straight out of New Orleans. The original Café Du Monde coffee stand set up shop in 1862, and continues to serve the café au lait and beignets it for which it became famous. Now you can mix up a pot of the robust coffee at home, sit back and imagine you’re spending an afternoon in the Big Easy.