If you ask a coffee connoisseur what the best coffee in the world is currently, they are likely to say the Jamaican Blue Mountain Coffee.  Grown in the Blue Mountains of Jamaica it is known for its mild flavour and lack of bitterness and is one of the most expensive coffees on the market.  Currently around 80% of the coffee is exported to Japan while the beans are also the base for the Tia Maria coffee liqueur. 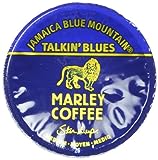 Price Disclaimer
The Blue Mountains are an area between Kingston in the south of the country and Port Antonio in the north and rise up to 7,500 feet, making them some of the highest in the Caribbean.  The climate of the area is high in rainfall, cool and misty and the soil is very rich with excellent drainage.  This combination of soil and climate is thought to be perfect for the coffee plants.

There are five different grades of Blue Mountain coffee that have very strict definitions.  No.1 has to have 96% of beans that are size 17/20 on the Coffee Industry scale; No.2 must be between 1/17 size; No.3 must be between size 15/16.  After this is the peaberry variation, where 96% of the beans must be peaberry shaped (where a single bean has developed instead of the normal two in a pod and are a more oval shape).  Finally, the remaining beans are classified as Blue Mountain Triage.

How to make the coffee

The traditional way to make coffee using these beans is with a French Press, a drip pot or a percolator.  Take two level tablespoons of the ground beans to get an 8-ounce serving and add to water that is just past boiling.  It is also said that it is best to drink it within an hour of making it to get the best of the taste.

Storing the beans is best in an air tight container particularly one with a regassing valve so that no air or moisture can get in and spoil the beans.  It is not advised to store these beans or the ground coffee in the refrigerator or the freezer.

However if you have a coffee machine that works with K-cups, the good news is that there is now a pod made from 100% Jamaican Blue Mountain coffee so if you don’t have the facilities to make the coffee the traditional way, you can still enjoy the amazing taste.

The great flavour given by the Blue Mountain beans means that they lend themselves to a host of other recipes as well as just a traditional coffee.  Once such idea is to make Jamaican Coffee Brownies.

To start, take 2 cups brown sugar, 250g salted butter, ¾ cup cocoa powder, 3 ½ tablespoons of the coffee beans finely ground and add to a bowl over a pan of water to melt together.  Once the mixture is soft and smooth, add ½ teaspoon of ground ginger and the same amount of ground cinnamon along with a pinch of salt.  Beat in slowly 3 large eggs to give a glossy finish.  Add 1 ¼ cups of cake flour with a sieve to allow slow mixing then add ¾ cup of chopped pecan nuts.

You can now add the mixture to a lightly oiled 13 x 9 inch baking pan and bake in the oven for 25 minutes or until cooked.  Leave to cool.  Meanwhile, make a topping by mixing 200g dark chocolate with 6 tablespoons of freshly brewed coffee.  Stir until mixed together, rest for half an hour until thickened then spread over the brownies.  This will make about 20 squares of brownie, unless you want amazingly large portions!